My time in Sosh on Wednesday was a little different than normal. (Although, I'm beginning to see that every trip to Sosh is "a little different.") Doug's former youth pastor and family were visiting from America this week, so they all came out to Granny's to meet the family and see the ministry Doug's been doing there. Since there were six of us headed to Sosh, in cars that seated five, I ended up driving by myself. (I had forgotten how much I love driving alone on the highway...that was fun.)

I stopped by Emily's house first to give her and various others a ride over to Granny's. We arrived at Granny's a little while before Doug and his friends, so when they walked in the door, I was sitting on the couch talking and laughing with the family. Before too long, Doug invited his friends to walk around Block KK and see a bit of Soshanguve. I was going to stay and talk, but Sophia and Anna and many of the others said "Let's go, too!" So I did. We walked around and visited several families and friends that Doug knows in the neighborhood--some of them now my friends as well. What made me laugh was that I felt such a part of the family, so at home just hanging back, talking with friends. Similarly, when we all headed over to Emily's just before sunset, to take a look at the site for the community garden, Doug was showing his friends around, and I was quite at home inside talking with Anna and Christinah and Emily.

One of the first things Emily said to me when I arrived at her house on Friday was: "Barbara, on Wednesday, you were well at home." This made me smile. I feel the same way.
Posted by Barbara at 2:15 AM No comments:

The past month and a half has flown by, and I feel as though I have hardly a free moment to dash off an update, but it's high time I did so! My trip to Cape Town with my fellow apprentices was amazing. It was a great time of being away, relaxing together, and exploring a different part of the country. Hiking on Table Mountain, wandering on a beach with penguins, watching amazing sunsets along the Cape Peninsula and at the Cape of Good Hope were just a few highlights of the trip. Another highlight was seeing how well we traveled together and how the five of us have become such close friends. I feel so privileged to be sharing this experience with these people who I barely knew five months ago!

After returning from our week off, we had two weeks of the "inviting posture" before being joined by 6 participants from America and Ireland for a "Road Trip." It was great to have the Road Trippers around (even one staying in my room for the first week), to share with them a bit of what we do here and what God is doing in and around us. However, those two weeks were a whirlwind, and I'm still recovering! We've had quite the parade of visitors of late. As an introvert, I'm looking forward to getting away this coming weekend.

We're coming up to the end of our third posture, marking the halfway point for the year. The five apprentices will head to a small seaside town near Durban on Friday, for a reflection weekend. It'll be good to have some time and space to think back on the past posture as well as the year so far. Over the past few weeks, I've begun studying the Bible with the women in Granny's family out in Soshanguve, in response to an invitation by a couple of the granddaughters. I seem to always go out there with a plan that ends up being redirected as they ask to study passages they've been curious about in addition to what I've prepared! It's been so encouraging to see the ways God is working in the lives of these women as they share more of their lives with me and we seek God together.

Here at Pangani, our community is in the midst of working through a (rather lengthy) leadership assessment test, and in a couple of weeks, a staff member from CRM will be here with us to talk through it in more depth. I'm sure this time will be helpful especially for us apprentices as we start thinking more seriously about what God might have for us beyond our apprenticeship here. It seems that every other conversation I've had lately has included the question "What will you do after NC?" As I move past the halfway mark for my time here, I'll need to start confronting that question in earnest!

Some things to be in prayer for:
--Pray that this coming weekend would provide rest & time to hear from God as I reflect on all that's swirling around in my head from the intense past few weeks
--Pray for my deepening relationships with the women in Granny's family--especially Emily, Anna, and Betty (three of Granny's daughters), and Sophia, Champagne, and Winnie (three of the granddaughters)
--Pray for our community and especially the apprentices as we look at our leadership gifts in more depth
--Pray for discernment and clarity for me as I begin to seek out the next step beyond my time here

With that, I must return to completing the aforementioned lengthy leadership assessment. Yay!
Posted by Barbara at 12:37 PM No comments:

This past Sunday night, we invited 50-some people to Pangani for what we called a "Global Awareness Experience." This event allowed attenders to have a taste (bad pun) of the ways people live and eat worldwide. Our invitations were purposefully vague--not knowing what to expect helped everyone think more about what was happening as the night played out. As people arrived, they were asked to draw a number that would determine where they sat for the meal. Each table represented a different economic class, and the number of people seated at each table represented the approximate percentage of people who live at that level worldwide. Table One: Three people sat here and enjoyed a three-course meal, served by a waiter. They enjoyed salad, steak, roast potatoes, and green beans, followed by chocolate mousse for dessert. Cloth napkins, a color-coordinated tablecloth, nice dishes, and candlelight completed the experience. They sat apart from the other tables and enjoyed their delicious gourmet meal as all the other tables looked on. Although some wanted to share their food with others who had less, they were told by their waiter: "This isn't that kind of restaurant." Table Two: This table of ten enjoyed a family-style spaghetti dinner, with french bread and salad, and bottles of soda to share. They ate from regular plates with plain flatware and used paper napkins. Table Three: No tablecloth and no fancy dishes here...our table had a meal of rice & beans, which we ate from plastic plates. The sixteen of us had clean water to drink from our plastic cups and we each had our own bowl or plate, plus a fork. Table Four: Here is where the term "table" becomes negotiable. This group of 14 ate rice from a common bowl, and had dirty water to drink from a few cups (there weren't enough for everyone to have their own). Some at this table became a little bitter, and attempted to steal food from Table One. (They were reprimanded by the waiter.) Table Five: yet again, not exactly a table. Six people gathered around this wastebasket fire and scavenged food from a trash can. Later in the evening, they began to beg food from the other tables. They actually ended up eating better than our table did, enjoying scraps of steak and potatoes leftover from Table One (these they dug out of the trash) and whole plates of spaghetti that were shared by Table Two.

Going into the evening, I was nervous about how things would play out. When I invite people to an event, I feel responsible for how things go for them--I want to make sure they have a positive experience. I'd invited several women from Soshanguve, and I let them know that this wasn't going to be a usual meal. The vagueness of the invitation made me wonder--and worry a bit--about how they would react. Admittedly, I was a little nervous that I would end up at Table Five--but I was more nervous that my guests would land there and have a bad experience.

My fellow apprentice Sarah and I picked up Emily and Winnie and brought them to Pangani, and when we arrived, everyone but Winnie drew Table Three. Winnie drew Table Five. I worried about her having to scavenge her meal from a trash can, but as it turned out, she ate better than I did and had a great time hanging out with the "homeless" people in her group!

The evening turned a lot of expectations upside down for most of us. Sitting at Table Three meant that I had a fairly filling, if plain meal. It meant that I had some food left to share with those who had less. However, Table Five didn't want our extra rice--they preferred leftover spaghetti from Table Two. I'm used to having something to offer to those less fortunate than myself, and it was strange to feel as if what I had wasn't good enough to be shared.

At the end of the meal (which wasn't really much of a meal for some), we gathered in two groups to discuss the evening and our reactions to it. The goal of the event was to get all of us to think more deeply about how things actually are in the world, where we fit within that bigger picture, and to experience a bit of what life is like in different economic classes. Ultimately, we all were asked to consider what we can and should do with the awareness we gained from the experience.

As we talked in smaller groups at the conclusion of the night, I was again struck by the overwhelming generosity of my friends from Soshanguve. Their economic level is probably closest to the Table Three group. Emily and I talked a lot about how she wishes their family had more--not so they could live like Table Two or Table One, but so that they could better help others who have less. She talked about how hard it is to not be able to help in the ways she would like. And we talked about how important it is to help in the ways we can.

What are the ways you can share what you have with others around you?
Posted by Barbara at 2:28 PM 2 comments: 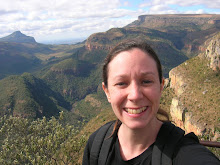